William C. “Bill” Bray and his wife, Christine A. “Chris,” each grew up in families with nine children in what today is known as Edgewood, Kentucky. Neither Bill nor Chris had many material things growing up, but their families did provide them with plenty of love, food, and clean clothes.

After a series of sales jobs in the 1980s, Bill, through a friend, was offered the job as Director of Sales with River Transportation Company in Cincinnati. In this position, Bill grew to love the river industry, as well as the people who worked within it. He made many great friends and contacts over the course of his time at RTC, including meeting a gentlemen named Craig Borneman. 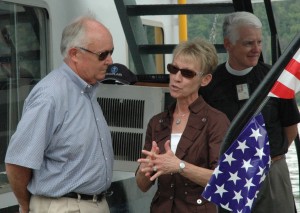 Borneman took Bill under his wing, much as an older brother would, and helped him learn the ways of the river business and people involved in it. Borneman also introduced Bill to Earl Faig, who then was Vice President of Sales for the Ohio River Company, which at the time was the largest barge line in the country.

In 1987, after ORCO’s Sales Manger had retired, Faig was looking for a replacement. After several interviews and a battery of tests, ORCO offered Bill the Sales Manager job, despite the fact that he didn’t have a college degree.

At ORCO, Bill was charged with working with most of the the utilities in the Midwest, several of which are C&B customers today. These utilities included Cincinnati Gas & Electric, Louisville Gas & Electric, Kentucky Utilities, Dayton Power & Light, and American Electric Power. It would be through these relationships that the future Bray Marine would ultimately be built.

While Bill had great success as ORCO’s Sales Manager, after several years, it became readily apparent that he was never going to move further up in management at the company because of his lack of a college degree.

One evening, in late 1994, Bill and Chris discussed an opportunity that Bill saw with several of his customers. This was during the period of deregulation of the utility industry, and utilities were looking for ways to cut their operational costs. One of the ways to cut costs, Bill believed, was for these utilities to subcontract their harbor boats and harbor work to outside contractors.

Bill and Chris believed that this would provide a wonderful opportunity for their family to finally start its own business, but they realized they needed help. Because the river industry is capital intensive and Bill had no experience in operations, the couple thought they needed a partner that could provide both of these assets.

Once again, through his good friend Borneman, the couple was able to find that partner, and on April 1, 1995, Bill left ORCO to start the family business with this partner. Things fared well in the beginning, but after about a year, it became apparent to Bill and Chris that the partnership was not going to work. So, in the spring of 1997, the couple decided to dissolve the partnership and go at it alone. On July 1, 1997, they founded Bray Marine.

Chris and Bill put in a lot of long, hard hours building their business into the company it is today. But they also did it with the help of a number of great friends. Starting off with only a few boats and a few contracts, Bray Marine grew to eight boats and other equipment, including several deck flats, loaders, and excavators before the business merged with Greater Cincinnati Marine.

Today, through more great friends, the Bray family is back in a partnership with the Carlisle family, and with them, they have formed Carlisle & Bray Enterprises, LLC. This family of companies offers all types of services to the river industry, power plants, and terminals.

Bill and Chris’ two sons, Scott and Chad, work in the company, and the couple is starting to slow down and step back a little. Chris and Bill recognize that they have had a great deal of support and help over the years, for which they are grateful, because without it they know that they could have never have built Bray Marine into the business it became, which is now part of Carlisle & Bray Enterprises.