C&B Marine held a christening ceremony for three new vessels in its fleet on Saturday, October 31, and signed a Statement of Support with the Employer Support of the Guard and Reserve (ESGR) organization in an effort to recruit more veterans as employees at the company.

In the ceremony on the Ohio River here, C&B Marine, a subsidiary of Carlisle & Bray Enterprises, the Covington, Ky.-based inland marine company, christened a new towboat, The M/V Atlantis; a new floating dry dock, The Bluefish; and a new crew boat, The Little Bit.

Carlisle & Bray Enterprises, which employs about 175 workers, operates various barges, multiple deck flats for clamshell loading and unloading, barge cranes, and other construction equipment on the Ohio River. The company also operates four fleeting areas and a heavy lifting dock in the Ports of Cincinnati and Northern Kentucky.

Rev. Kempton D. “Chaps” Baldridge, chaplain of The Seaman’s Church Institute in Paducah, Ky., officiated the christening ceremony at the company’s fleeting facility located at 6778 River Road in Hebron, Ky. C&B crew members, employees, and board members; members of the Carlisle and Bray families; clients of the company; representatives from ESGR; and Rear Admiral Robin E. Osborn, Commandant of the Ohio Naval Militia, all attended the ceremony.

C&B Marine contracted with Marine Builders, Inc., located in Utica, Ind., to construct The Atlantis, the 18th towboat in its fleet. The vessel is a 1,320 hp., 60- by 25-foot towboat that will be used for short-line towing and dedicated service on the Ohio River.

The Atlantis is the third new towboat C&B Marine has placed into operation during the past year. Last October, C&B Marine christened The Enterprise, a 2,600 hp., 90- by 34-foot towboat, and The Discovery, another 1,320 hp., 60- by 25-foot towboat.

“Our investment in three state-of-the-art towboats in the past year underscores our commitment to our customers as well as our commitment to the safety and well-being of our employees,” said Rob Carlisle, president of Carlisle & Bray Enterprises. “While the new vessels are nice addition to our fleet, we recognize that our employees are really our greatest asset.”

In a process that takes one to two hours, the dry dock vessel can be submerged underwater to allow another vessel to float into its interior walls. The dry dock is then drained and it rises out of the water to allow its load to come to rest on a dry platform. This allows for the construction, maintenance, and repair to ships, boats, barges, and other watercraft in the floating dry dock.

Floating dry docks are particularly advantageous for an inland towing, barge, and fleeting company like C&B Marine because they enhance both the company’s operational footprint in the marketplace as well as enable it to easily and conveniently maintain, repair, and upgrade its own equipment, said Matt Kristof, chief operating officer for C&B Marine.

“With 18 towboats, a crew boat, and 40-plus barges of our own, Carlisle & Bray was both ready and in need of this asset,” Kristof said. “The partners (of the company) have positioned the company for growth and we are exploring every opportunity to expand our operations in both the marine and energy-services divisions. As we continue to grow, the dock will help ensure that we are able to maintain and repair our own equipment, without having to worry about availability elsewhere.”

The Bluefish is named after USS Bluefish (SS-222), a Gato-class submarine that completed nine war patrols during World War II from September 1943 and July 1945. The vessel’s operating area extended from the Netherlands East Indies to South China Sea and is reported to have sunk 12 Japanese ships.

Ambrose Adrian Schwab — who was the father of Chris Bray, the matriarch of the Bray family, and the maternal grandfather of C&B partners Chad and Scott Bray — was a sailor on the USS Bluefish. An image of the USS Bluefish is emblazoned on an interior wall of the vessel, which will plunge underwater when the dry dock is submerged.

The third vessel that C&B Marine christened was a new crew boat, The Little Bit. The Little Bit will ferry crewmembers to and from vessels that are operating on the river.

Employer Support of the Guard and Reserve is a Department of Defense agency established in 1972 to help develop and promote a culture in which all American employers support and value the military service of their employees.

In addition to serving as an advocate for military veterans in the workplace, one of ESGR’s primary missions is to encourage the employment of Guardsmen and Reservists who bring integrity, global perspective, and proven leadership to the civilian workforce, said Harry T. Wylie, State Public Affairs Officer for Kentucky Committee for ESGR.

At the christening ceremony on Saturday, Rob Carlisle, president of Carlisle & Bray Enterprises, signed a Statement of Support with ESGR. The company then unfurled a sign on The Atlantis showing its support of ESGR. C&B Marine also had the ESGR name and its mission permanently painted on the inside of its floating dry dock.

“Kentucky’s committee for ESGR is thankful for the support of C&B Marine, especially for putting the ESGR name on the side of its new vessel,” said Maj. Gen. (retired) D. Allen Youngman, the state ESGR chair since October 2014. “Now ESGR has a ‘floating billboard’ that will help us and our important mission become better known. C&B’s commitment to supporting our reservists and guardsmen is unique and welcomed.”

Maj. Gen. Youngman, who formerly served as Kentucky Adjutant General, said that 40 percent of active U.S. military personnel today are members of either in the National Guard or the Reserve. He said these veterans make excellent employees.

At the ceremony, Maj. Gen. Youngman presented C & B Marine with the a Department of Defense Seven Seals award for its “outstanding support.”

“ESGR is an invaluable resources for active duty and volunteer service members in Kentucky, helping service members with employment opportunities, whether they are unemployed or underemployed,” said Staff Sgt. Scott Raymond, public affairs officer and noncommissioned officer in charge of the Kentucky National Guard.

“By signing the statement of support of ESGR, C&B Marine will find, like many other employers in Kentucky have found, that this relationship is beneficial to both the employer and service members alike.”

As Ohio Navy Commandant, RDML Osborn, who served 27 years in the U.S. Navy prior to his appointment as Commandant, is responsible for the command and military readiness of the Ohio Naval Militia and reports directly to Major General Mark. E. Bartman, the Adjutant General of the Ohio National Guard.

RDML Osborn began his visit to Kentucky the day before the christening ceremony when he embarked on The Atlantis and broke his one-star flag on the mast of The Atlantis. RDML Osborn, along with Rev. Baldridge, then conducted a private burial-at-sea on the Ohio River on Friday afternoon for Ohio Navy veteran Journalist First Class Daniel Sekki. Members of the Sekki family joined RDML Osborn and Rev. Baldridge for the ceremony. Later that night, RDML Osborn occupied the stateroom of The Atlantis.

During the christening ceremony, RDML Osborn presented the flag of Ohio and plaque from the Ohio Naval Militia to C&B Marine. Rev. Baldridge presented a U.S. Merchant Marine flag to the crew of The Atlantis, as well as caps to captains and crewmembers at C&B Marine. 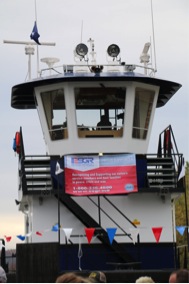 The ESGR logo and its mission painted on The Bluefish and unfurled as a sign on The Atlantis. 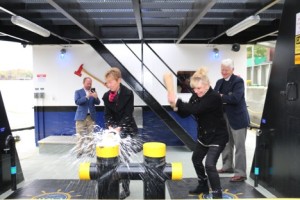 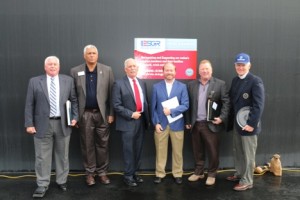 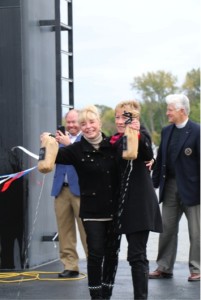 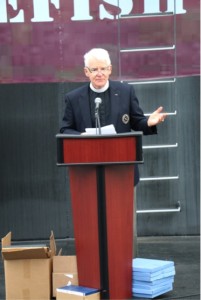 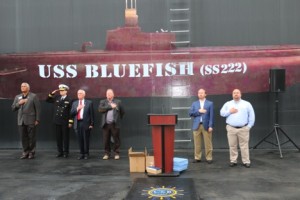 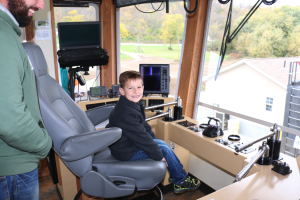 A future towboat captain in The Atlantis pilothouse? 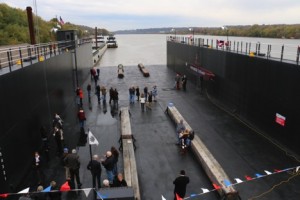 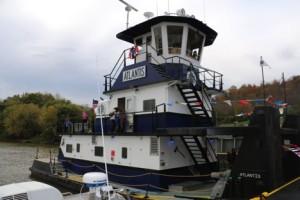