C&B Marine sponsored a lunch with U.S. Rep. Thomas Massie, R-Ky., on August 19 after he took a towboat tour and ride on the Ohio River with members of C&B Marine management team and representatives from other inland marine businesses.

With Congress currently in recess, Rep. Massie is using his time out of session to visit communities and industries throughout Kentucky’s Fourth Congressional District. “This is the time that we take to get acquainted with our constituents and the needs of the businesses in our communities,” Massie said of the visit. 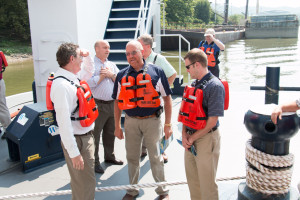 The primary reason for this visit was to allow C&B Marine and other CORBA members discuss with Rep. Massie the issues and needs of the inland waterways industry, particularly the towboat and barge industry.

One topic of discussion was the need for a modern, well-maintained lock-and-dam infrastructure essential for safe and efficient waterborne commerce that will support U.S. competitiveness in the world market. Three locks and dams are located in the Fourth Congressional District — Greenup, Meldahl and Markland – and Rep. Massie said that he has visited all three during his time in Congress. 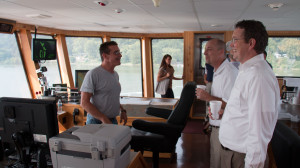 Another topic discussed CORBA members discussed was the Water Resources and Development Act (WRDA), the first waterways-related bill to pass through Congress in six years, which was signed into law by President Barrack Obama on June 10, 2014.

One feature in the new law puts a cap on expenses for long — and often costly — studies focused on infrastructure projects, with the goal of speeding up the research and funding allocation processes for these projects. 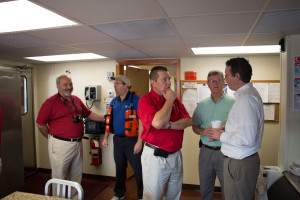 Rep. Massie said he made several strong arguments about the WRDA when he was pitching the bill to other members of Congress. “There are a lot of good reforms in the bill, which helps to not waste money on the studies instead of actually building the projects,” he said.

“Secondly, if Congressional members don’t reauthorize the WRDA, they are abdicating their authority and responsibility to designate this money — they are just giving it to the president. Finally it’s constitutional. There is a federal nexus for spending in our inland waterways that was established in 1824.”

Rep. Massie believes that the bill got strong support in the House because he and Rep. Bill Shuster (R-Pa.) were able focus both Republicans and Democrats on issues about which they agreed instead of flooding it with regulations that the two parties couldn’t agree upon.